Lübeck is, again, one of the cities of the Hanse trade union that Hamburg, Rostock, Bremen, Wismar and many others belonged to.

Lübeck is only about 45 minutes away from Hamburg. So, if you are in the area around Hamburg, take your rental car or the Regio train from Hamburg main station, which goes every half hour and have a look around the city of marzipan, the city of Thomas Mann and Günther Grass.

Have a stroll around the little streets and possibly come by the museum of theater figures. 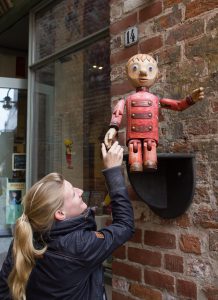 While you’re on the way through the smaller and bigger streets and gates, wonder to Schmiedestraße and visit the 750 year old Petrikirche / St. Peter’s Church. Spend the 2€ or so and take the elevator 50m up to enjoy the view over the city. (Opening hours Tue-Sun 11am – 4pm)

As you might have figured out, this is actually one of my favorite parts in any city I go to. Go to the next available church, climb up to the top, enjoy the view over the surrounding buildings, the whole city outline, streets, sometimes monuments or other interesting sights, you can have a look at after coming down from the top. Its as simple as that.

Especially in Lübeck check out the tower of the Petrichurch from where you can see the curvy and narrow roads, the very old buildings and again the Holstentor, the Holsten Gate. Inside the Holsten Gate is an exhibition of city history. If you are interested, and are facing the Holsten Gate, with your back to the city, the entrance is directly at the left side.

The restaurant to go to in Lübeck is the “Schiffergesellschaft”. It is located in Breite Straße 2 and was built in 1535 as a house for conventions and meetings of the mariners. It is not the cheapest place to eat, but definitely worth the visit. Even if you only have a look inside you’ll be impressed by the old marine décor. Restaurant Schiffergesellschaft

When stopping by the worldfamous café Niederegger, amongst others, you’ll find the Holstentor made of marzipan as well. But Niederegger, located in Breite Straße 89, is a chapter for itself. Since I can remember we have been to Niederegger at least once a year a week or so before Easter. They have an amazing selection of Easter Eggs, with dark, white and milk chocolate, filled with peppermint, strawberry, raspberry, lemon, nougat, different kinds of liquor and of course marzipan…. Just incredible!!! Café Niederegger

The rest of the year Niederegger sells a lot of other figures and shapes of marzipan. Go straight ahead through the shop and up the stairs, where you’ll find the nicer part of the café and again an amazing selection of cakes. I personally can never decide which one I like best, so no recommendations here. After you’ve had your piece of cake (or two) have a short walk through the museum of marzipan, which is located just above the café. The stairs are right next to the kitchen.

Not only is Lübeck a town that has been UNESCO world heritage since 1987, because of its old buildings and narrow roads, but also it is home to three famous people, whom I’d like to mention here.

The first famous person Lübeck can show off with is Thomas Mann, the author of the book “Buddenbrooks”, which was published in 1901. He was born in Lübeck and was awarded the Nobel Price in Literature in 1929 in Stockholm. The Buddenbrook House can be visited in the so called center of Heinrich and Thomas Mann located in Mengstraße 4. If you’d like a guided tour in English, call them 2-4 weeks in advance, as they are quite busy.

Günter Grass is the second famous author. He might not be the number one association
with Lübeck, but he was born in Lübeck in 1927 as well and awarded the Nobel Prize in Literature 1999, because he is (the author) “whose frolicsome black fables portray the forgotten face of history”. So, if you are interested in some more information about the author of “The Tin Drum” you’ll find the Günter Grass Haus in Glockengießerstraße 21. 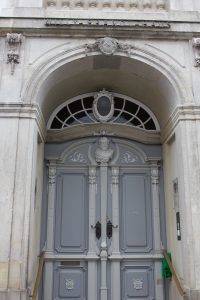 This brings me to the last famous person of Lübeck: Willy Brandt.
He was born in Lübeck in 1913 and became politician. Willy Brandt was awarded the Nobel Peace Prize in 1971 for his efforts to strengthen cooperation in western Europe through the EEC and to achieve reconciliation. The Willy Brandt House is located in Königstraße 21. If you’d like an English tour, call them about a week in advance. Normal admission to the exhibition is free of charge.

You see, the small city of Lübeck has a lot to offer and explore and the best of it, everything is within walking distance as you might see from the map above.